What She Does With Plastic Crates And Picture Frames Is Brilliant. Watch! 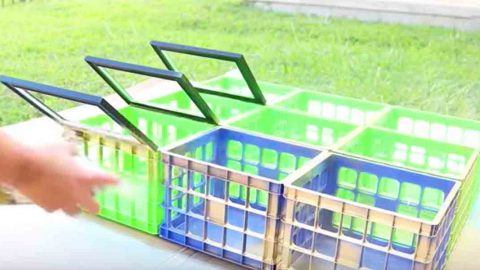 I must say that I was really surprised when I saw how clever this DIY project was and it would have never occurred to me to do this…it’s unbelievably brilliant!

This project will make you think twice about running out and buying a cabinet for some desperately needed shelving!

If you’re needing some storage or shelving in your bathroom (or any other room) this is so perfect and cheap too! After she sprays gold paint on the crates and picture frames it looks really nice and one would never guess that they used to be blue and lime green. And, I know nobody would guess that she used dollar store picture frames for the doors!

I made one of these for my daughter’s bathroom and she was so excited about it. Since having it in her bathroom she’s been able to stay organized and can now actually find something. Sometimes it’s just a matter of having a place to put things…especially when it comes to kids.

It’s hard to believe that people think this stuff up! My hat’s off to all of the genius’s out there and I’m especially thankful that they share their clever ideas with us!

Watch how Jay Munee puts this clever storage cabinet together in her step by step tutorial. 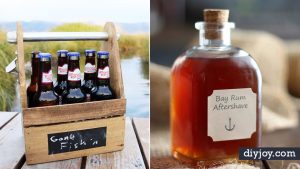